The assumption is that the system user account on a given system used to run a given "dispatchCmd" from ControlTier (usually from the administration node running Jobcenter) has been "equivalenced" to all client users and systems necessary to allow non-interactive authentication via SSH. This is usually achieved using public key authentication.

While it is a fair bet that a given Unix/Linux system will be running the SSH server to enable login services, this is almost never the case for Windows systems.

This posting captures the (unfortunately complex and arcane!) steps necessary to deploy an OpenSSH server on a Windows system. The goal is to enable the SSH service, enable a designated Windows user for remote access and facilitate command execution using the command shell (cmd.exe). (These notes do not deliver a full Cygwin installation, just the minimum necessary to enable SSH access).

The notes are an updated version of a posting to the ControlTier Google group. 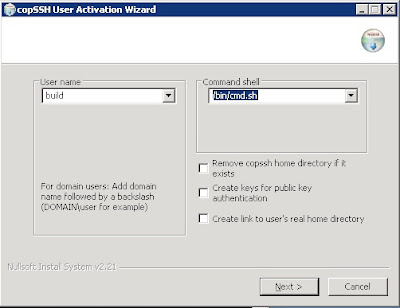 Configure the environment
Despite the complexity of these notes you may concede the relief not having to reboot the Windows server to make it all work!

following this process on my XP required me to modify the windoze firewall since it was actually On.

I did the following:

Deploying copSSH to Windows Server 2003 has revealed an issue specific to that variant of Windows.

A future enhancement will modify ControlTier's Node type to store usernames and passwords as distinct attributes and supply them to Ant's SSHExec task thereby obviating the need for PKA to automate command execution.

Meanwhile, I've followed these instructions to switch the user who runs the SSH service to the application owner account required by my project.

While not completely satisfactory, this approach at least allows PKA to continue to be used while guaranteeing that commands run as the desired user account.